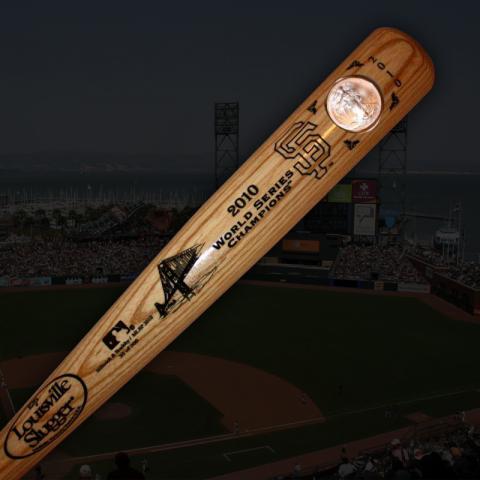 In commemorating the historic 2010 World Series Championship won by the San Francisco Giants, Louisville Slugger has just released this first-ever Coin Bat with a US MINT SILVER COIN. With permission from Major League Baseball, Louisville Slugger has inserted a 1 oz. Pure Silver 2010 US Eagle Coin into the barrel of 500 Giants World Series Championship Commemorative Bats. This is a rare piece of memorabilia celebrating the team’s first World Series Championship since moving to the west coast in 1957. A unique, limited edition piece of memorabilia like this will not last long so place your order right now. The US Mint in San Francisco was opened in 1854 to service the gold mines during the California Gold Rush. It was the first Mint opened west of the Great Plains. EVERY Silver Eagle Coin used in these very special commemorative Louisville Slugger Bats will bear the “S” mark indicating it was minted in the Champion’s San Francisco Mint. Every bat is laser engraved with the Giants’ logo, World Series Championship logo and the scores from each game played during the series. These bats are approximately 35″ in length and about 32 oz. Place your order now before this very rare piece of baseball memorabilia is no longer available. A second edition will not be issued. Due to the very limited availability of this piece your credit card will be charged for the full amount of this purchase to ensure we reserve your bat. We will confirm your order by Email. This bat is not game used.