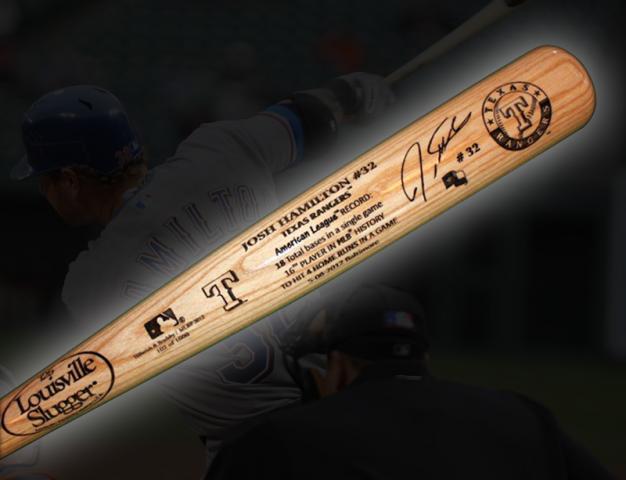 Louisville Slugger has been making Major Leagues Bats since 1884, and now they are honoring Josh Hamilton’s American League record-breaking, FOUR HOME RUN DAY with a full-size Northern White Ash Bat. The official Louisville Slugger bat features Josh Hamilton’s facsimile signature and the words, “American League Record Most Total Bases in a Single Game, 16th Player to Hit 4 Home Runs in a Game. May 8th, 2012.”  This beautiful collectible bat weighs approximately 32 oz., is 34″ in length, and includes the Texas Rangers logo. Each bat is individually numbered and comes from a strictly Limited Edition set. A second edition release is not expected so order yours now! This hand-crafted bat was made in America, and is officially licensed by Major League Baseball Properties and Josh Hamilton. Be one of only 1,000 fans to own this exclusive commemorative bat. This is a limited edition item. To ensure we reserve a bat for you we will charge your credit card for the full price immediately upon taking your order. We will confirm your order by Email. This bat is not game used. Please allow 4 to 6 weeks for delivery.