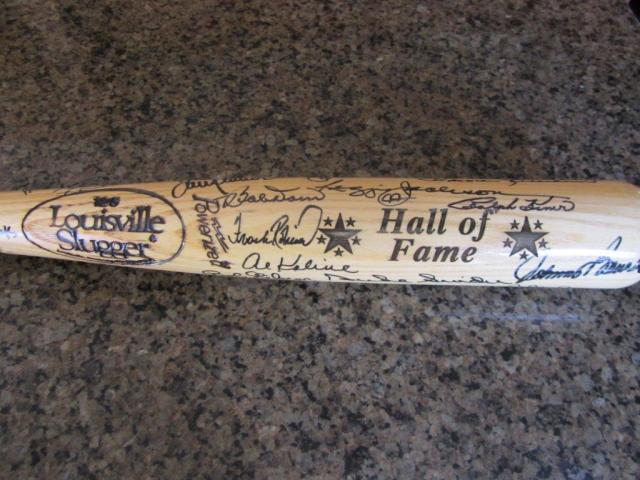 Here is a beautiful piece of Louisville Slugger lumber baring the signatures of some of baseball’s greatest players. This is a collection centerpiece that any game historian or long-time fan will proudly display on the wall of their home or office. This Louisville Slugger Model 125 Hall of Fame Bat was signed by 41 former Major League Baseball Players, all of whom have their likeness displayed in Cooperstown. A Full Letter of Authenticity from James Spence Authentication – one of the memorabilia industry’s most trusted names in verification and certification – comes with this bat. This one is in stock now and ready to ship out immediately. You and your friends will be amazed at the signatures captured on this handsome bat – players from some of the greatest eras in the game from the 1940’s right up to the 1990’s – this very rare piece of baseball memorabilia reads like a virtual “Who’s Who” of the Hall of Fame. This bat features the authenticated autographs of – Robin Roberts, Ernie Banks, Billy Williams, Fergie Jenkins, Richie Ashburn, Lou Brock, Joe Morgan, Hank Aaron, Bob Lemon, Luis Apparicio, Red Schoendists, MikeSchmidt, Willie McCovey, Warren Spahn, Brooks Robinson, Hoyt Wilhelm, Al Barlick, Tom Seaver, Bobby Doerr, Frank Robinson, Al Kaline, Bob Gibson, Ozzie Smith, Willie Mays, Eddie Matthews, Monte Irvin, Duke Snider, Whitey Ford, Steve Carlton, Johnny Bench, Ralph Kiner, Reggie Jackson, Yogi Berra, Harmon Killebrew, George Kell, Early Wynn, Phil Niekro, Enos Slaughter, Billy Herman and Gaylord Perry. Due to the very rare nature of this item we will charge your credit card for the full purchase price immediately upon receiving your order. This policy ensures we reserve this bat for you. We will confirm your order by Email. This bat is not game used.