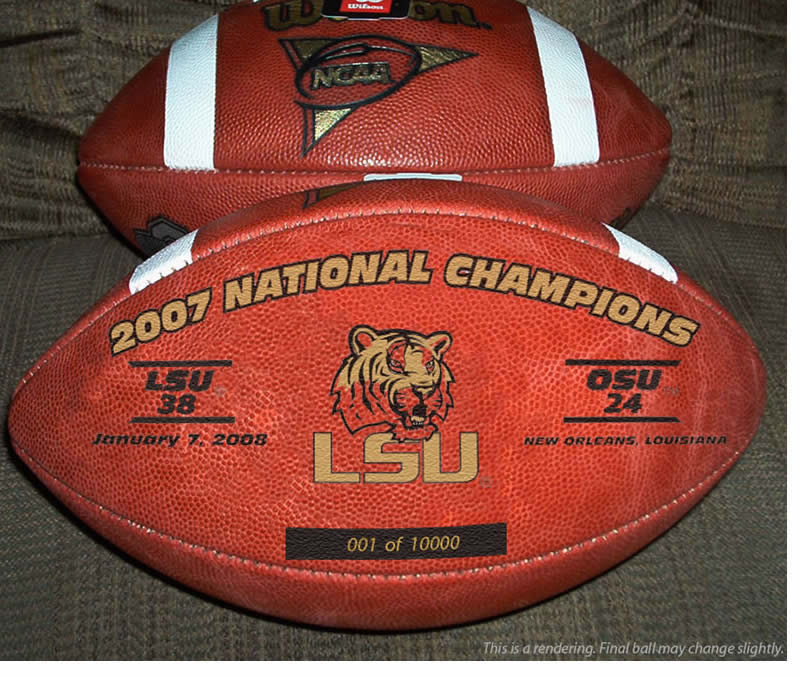 The LSU Tigers are kings of the college football world! After beating the Ohio State Buckeyes in the BCS Championship Game the Tigers and all their fans can proclaim college football’s top spot for the next 12 months. This limited edition commemorative game ball is the ideal way for loyal fans of the Bayou Bengals to celebrate a memorable season that culminated in college football’s ultimate prize. Only 10,000 of these BCS Championship commemorative game balls honoring the LSU Tigers are available. Order yours now! THIS IS THE SAME GAME BALL USED IN BCS CHAMPIONSHIP GAME, EXCEPT A THIRD COMMEMORATIVE PANEL HAS BEEN ADDED TO THE BALL TO HONOR THE CHAMPION LSU TIGERS. THE BALL IS INDIVIDUALLY NUMBERED AND LIMITED TO 10,000 BALLS. The LSU Tigers captured the SEC Conference Championship in a season that included wins over Auburn, Alabama, Florida and Tennessee in the SEC Championship Game. To close out the year in style LSU defeated the Ohio State to claim the title of BCS Champions, and send the Buckeyes home with yet another season-ending loss. Celebrate LSU’s memorable season with a limited edition collectible game ball now before they are all gone. Order your commemorative BCS Championship game ball collectible now! Your credit card will be charged immediately upon placing your order so we can reserve your LIMITED EDITION collectible. Order yours now before they are all sold out! This ball is not game used. Final product may vary slightly from the image shown. Product photo is a rendering.