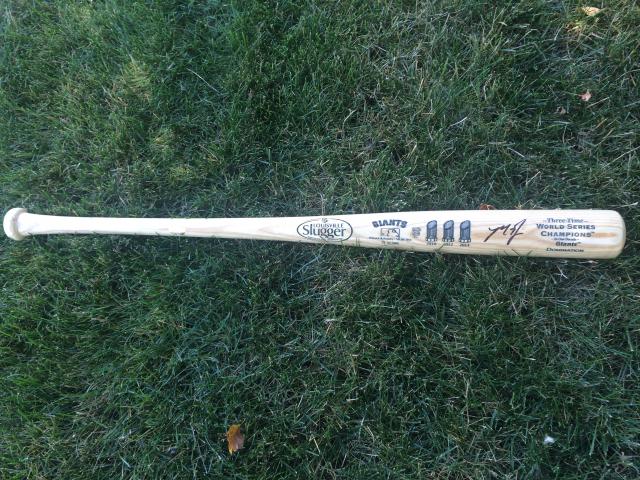 Big Time Bats has released this Louisville Slugger San Francisco Giants Decade of Dominance Ash Bat that has been signed by 2014 World Series MVP Madison Bumgarner.  This is the Giants? third World Series Championship in the last five years.  The Giants owe a lot of their success to their 25 year-old ace. Bumgarner was rewarded for his performance by being named the NLCS MVP and the 2014 World Series MVP. He is a two-time All-Star and now a three-time World Series Champion. Bumgarner was also a huge part in the Giants? 2010 and 2012 World Series victories. In game 4 of the 2010 World Series, he pitched 8 shutout innings resulting in a victory and a 3-1 series lead for the Giants. Bumgarner became the youngest pitcher to start and win a World Series game and also the youngest pitcher to make a scoreless start of 6 innings or more in the World Series. In game 2 of the 2012 World Series he pitched another gem, shutting out the Tigers for 7 innings.  Following the 2014 Series, Bumgarner holds the record for the lowest career ERA in the World Series at 0.25. This Louisville Slugger full sized bat is personally signed by Madison Bumgarner and commemorates the Giants? three World Series Championships in the last five years. The engraved and signed bat is exclusive to Big Time Bats and will be strictly limited to only 500 bats. Each bat will be individually numbered and authenticated by LOJO.Due to the limited nature of this offer we must charge your credit card for the full price immediately upon taking your order. This policy ensures we reserve a bat for you. We will confirm your order by Email. This bat is not game used. Please allow at least 2 to 4 weeks for delivery.