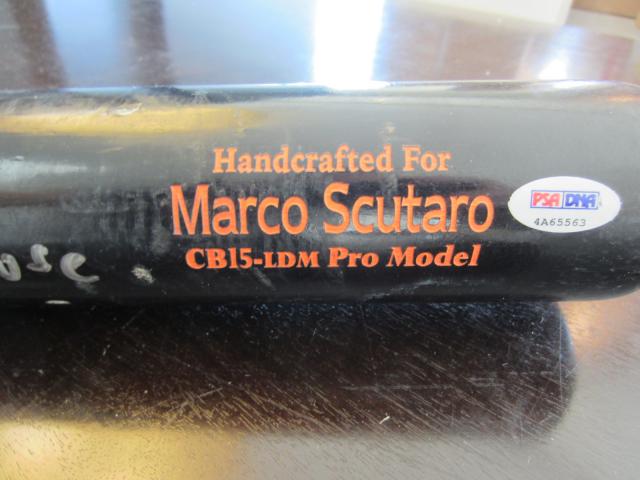 Marco Scutaro was acquired mid-season to help tighten up the middle of the Giants infield – and later became a key member of the World Series Championship roster. After taking a vicious hit from Matt Holliday during the NLCS, Scutaro responded with a great series that earned him NLCS MVP honors. He then drove in the winning run during Game 4 of the World Series to help the Giants clinch the title. This is a Marco Scutaro model Game Used Bat signed & inscribed the Scutaro, and the full authenticated by PSA/DNA. It is yet another fine piece of Championship Season memorabilia from the season’s heroes now available to Giants fans from BigTimeBats.com. This is a single bat offer that will not last for long as Bay Area baseball fans have generated swift demand for authentic game used and signed memorabilia from the Championship Season. Due to the very limited nature of this offer we must charge your credit card for the full price immediately upon taking your order to ensure we reserve this bat for you. We will confirm your order by Email. Please allow at least 2 weeks for delivery.