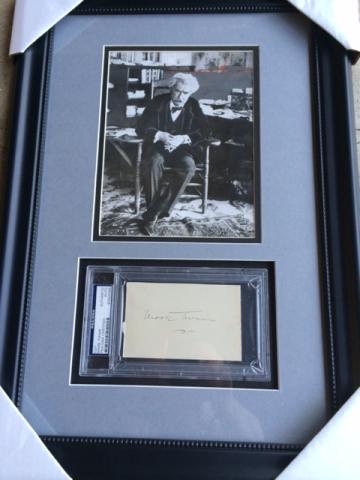 The signed sheet is in fine overall condition, and authenticated and

encapsulated by PSA/DNA.  Also included in the presentation is a photo

of the famed author.  Samuel Clemens signing as his pen name “Mark

Samuel Langhorne Clemens is better known by his pen name Mark Twain. One

of the most famous authors and humorists, he wrote the Adventures of

has been often called “The Great American Novel”. The setting of both

novels was inspired by Twain’s upbringing in Missouri.  Other ideas for

his writing came from his previous jobs as a printer, miner, and

his pen name, Mark Twain, from “mark twain,” the cry for a measured

Beyond his writing, Twain had a passion for science and technology,

patenting three inventions.  He spent much time with his friend Nikola

short-film.  This passion for science is said to have inspired his novel

“A Connecticut Yankee in King Arthur’s Court”, which featured a time

has been often called the “greatest American humorist of his age”. This fine framed piece is perhaps the most rare item you can add to any collection.

Due to the very unique nature of this product we must charge your credit card for the full price immediately upon taking your order. This policy ensures we reserve the framed presentation for you. We will confirm your order by Email. Please allow at least 2 weeks for delivery.