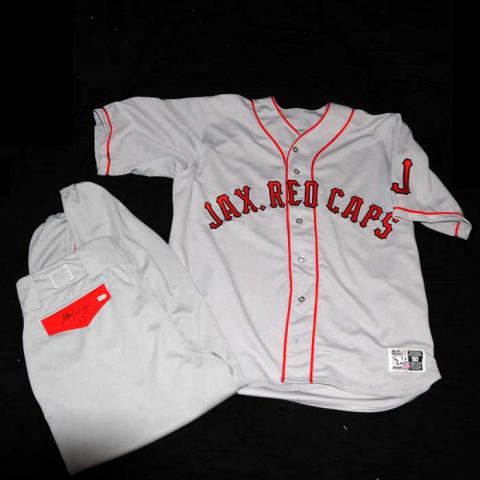 You can search high and low, scour the Internet, but you would be very hard pressed to find anything quite as unique as today’s Daily Bat Man Special available exclusively at BigTimeBats.com! Today we are very proud to present the uniform worn by Tampa Rays pitcher Matt Garza during the team’s June 2008 “Turn Back the Clock” game v. the Pittsburgh Pirates during which Rays’ players donned the uniforms of the former Negro League’s Jax (Jacksonville) Red Caps. Both uniform jersey and pants are included, and Ray’s pitching ace Garza signed both the back numeral on the jersey, as well as the red pocket flap on the pants. Both autographs are covered by MLB hologram authenticity. Both uniform pieces are authenticated by renown game-used expert Lou Lampson, who has graded this unique collector’s find a 9.5 out of 10. Full game uniforms are so rare, but the combination of the full uniform from a “throw back” game worn during the Rays’ 2008 World Series season by the team’s first pitcher to throw a No Hitter in franchise history – who also signed both uniform pieces – makes this a true one of a kind find.  Do not hesitate. This is perhaps the most unique piece we have had the pleasure to offer, but it will not last long as Matt Garza memorabilia has soared in popularity during this, the season of his franchise-first No Hitter.