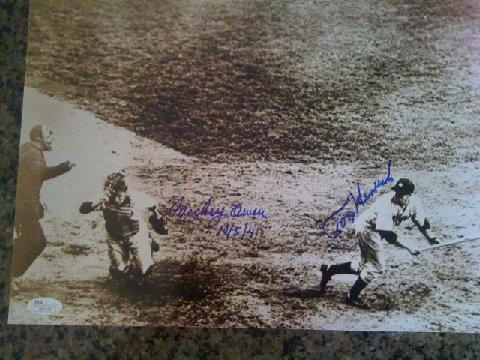 It’s not often that a single pitch or single hit decides the outcome of the World Series, but it’s been known to happen. Here’s a photograph of what may have been the first occurrence of that phenomenon. On the afternoon of Oct. 5, 1941, the Yankees were trailing the Dodgers 4-3, at Ebbets Field in Game 4 of the World Series and were down to their final out with Brooklyn about to tie the Series at two games apiece. Tommy Henrich, the Yankees’ star outfielder, was at the plate with nobody on base and a full count. A pitch broke sharply, and Henrich swung and missed. The pitch hit the heel of Owen’s glove and skipped away for a passed ball. The Yankees ended up winning the game, and they captured the World Series the next day. Offered here is a professionally matted and framed 11″ x 14″ photo showing “Owen’s Passed Ball,” signed by both Mickey Owens AND Tommy Heinrich, and inscribed with the date, 10/5/41. A Certificate of Authenticity from James Spence Authentication is included. Due to the rare nature of this item we will charge your credit card for the full price immediately upon taking your order. This policy ensures we reserve the photo for you. We will confirm your order by Email. Please allow at least 2 weeks for delivery.