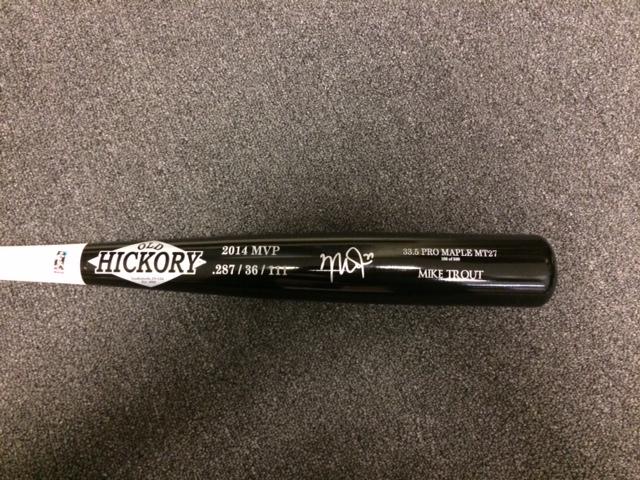 You will not want to pass on adding this beautiful, autographed specimen to your collection of signed memorabilia.  This is the only Mike Trout Game Model MVP bat on the market  – and BIG TIME BATS has obtained an exclusive, limited edition series of Trout signed bats celebrating the 2014 AL MVP Award. You will receive the exclusive bat, which is personally signed by the 2014 AL MVP, Mike Trout in brilliant silver against a spectacular black Old Hickory Game Model Bat; the same model bat that Trout uses during MLB games. This Game Model Bat is manufactured to the exact specifications matching weight and length of each bat built for Mike Trout by the Old Hickory Bat Co. Each bat is individually numbered and authenticated. This is an amazing value to commemorate Trout, the young MVP who is considered by many to be the greatest player in our generation. In just three full seasons in the Majors, Trout has already cemented himself as one of, if not the best, player in the game.In Trout’s first season, he was named the 2012 AL Rookie of the Year and has been an All Star selection from 2012-2014.Trout was also named the 2014 MVP of the All Star Game. Due to the limited nature of this offer we must charge your credit card for the full amount immediately upon taking your order.  This policy ensures we reserve a bat for you. We will confirm your order by Email. This bat is not game used. Please allow at least 2 weeks for delivery.