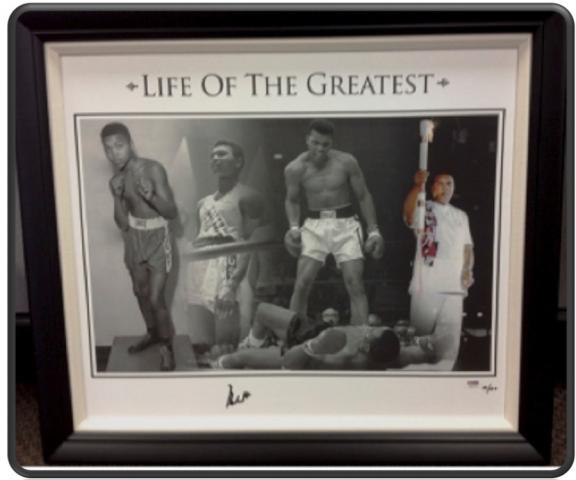 Muhammad Ali is the greatest fighter and entertainer of all time and BigTimeBats has obtained exclusive marketing rights to a work of art that commemorates the most memorable moments of his life. This is a 20×24 art canvas that blends four images of Ali throughout his lifetime. Each photo image has been transferred onto an art canvas, which gives this the exact look and feel of an original work of art. As you look at canvas from left to right the first image you see if of a young Cassius Clay at the age of 12, in a fighting pose and dressed in boxing trunks and shoes. The next image is from the 1960 Olympics when Cassius was 18 years old, wearing his USA Olympic uniform and Gold Medal. The third image, taken in 1965, is easily the most famous boxing image of all time. It shows Ali standing over Sonny Liston after knocking him out in the first round of their rematch fight. All three of these earlier images are in black and white, giving it an amazing contrast to the final image which is in color and was taken in 1996 in Atlanta.  Here, Muhammad Ali is pictured in white pants and a white USA Shirt holding the Olympic Torch during the opening ceremony. This is easily one of the most memorable Olympic opening ceremony moments of all time. This timeline canvas is simply titled: LIFE OF THE GREATEST and is signed by Ali on a white border below the images. This is exclusive to Big Time Bats and you will never find an autographed historical timeline of Ali’s career on canvas.