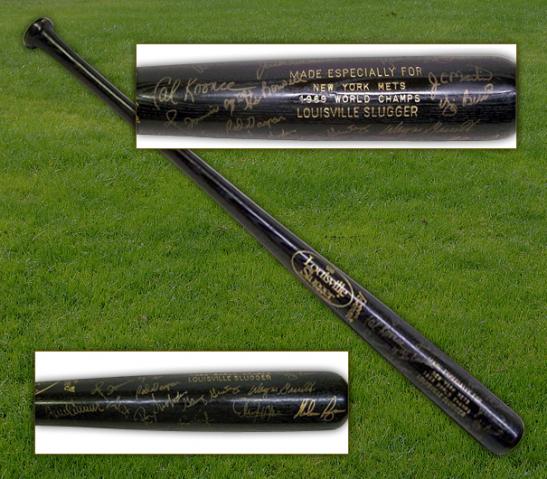 The 1969 Fall Classic showcased one of the most amazing late-season runs culminating into a World Series Championship for the Mets. As painful as ’69 was for Cubs fans, it was equally amazing for fans of the New York Mets, as they watched their team gel and the pitching staff dazzle opponents. This rare collectible is a black lacquer Louisville Slugger that has “New York Mets 1969 World Champs” engraved across the barrel’s player brand. This is the unique “Bat Man Special” available exclusively from Big Time Bats on July 15. Across the surface of the barrel there are 22 autographs from this special and historical championship squad. Signatures on this bat include Yogi Berra, Nolan Ryan, Tom Seaver, Al Weis, Ron Swoboda, Jerry Grote, Don Cardwell, Jack DiLauro, Gary Gentry, Cal Koonce, Jim McAndrew, Ron Taylor, JC Martin, Ed Charles, Donn Clendennon, Wayne Garrett, Ed Kranepool, Tommie Agee, Rod Gasper, Cleon Jones, Art Shamsky and Ken Boswell. This is a MUST HAVE for any Mets fan, bat collector or baseball historian. The signatures on this bat have been authenticated by PSA/DNA.