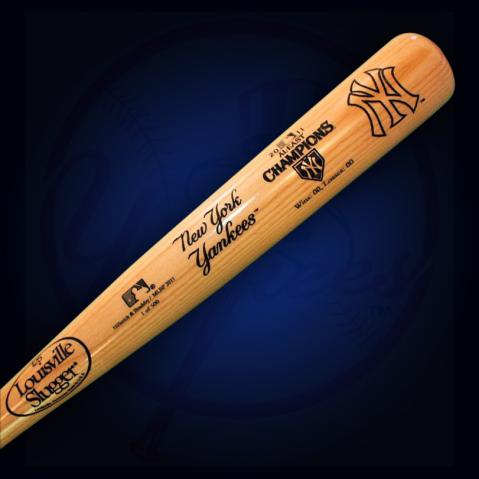 This past season marked a year of great moments in the history of the New York Yankees franchise. Derek Jeter knocks hit no. 3,000 out of the park, and Mariano Rivera saved his 602nd game to become the MLB leader in that category. However, now the Yankees have won yet another AL East title and the team, and its fans, are hungry for more this post season. To celebrate this Division Championship we are offering this Limited Edition New York Yankees 2011 AL East Champions Louisville Slugger Commemorative Bat. Created to game-use specifications, this beautiful piece features laser engraved team logos, season stats, and the AL East Champs design. It is the perfect piece of memorabilia to celebrate another great season by the Bronx Bombers. Order yours now. Since 2000 the Yankees have appeared in the playoffs in all but 1 year, this impressive run of success includes 4 Pennants and 2 World Series Titles. With a line up that features a number of stars and a pitching staff loaded with Aces, the 2011 Yankees make a formidable force as teams earn their play off spots. This handsome Louisville Slugger commemorating the Yankees’ 2011 AL East Championship will look great hanging on the wall in your home or office. Order it now as we expect loyal Yankees fans to generate swift demand for this Limited Edition item. Due to the limited nature of this bat we must charge your credit card for the full amount immediately upon receiving your order. This ensures we reserve a bat from this edition for you. We will confirm your order by Email. Please allow 4 to 6 weeks for delivery. This bat is not game used.