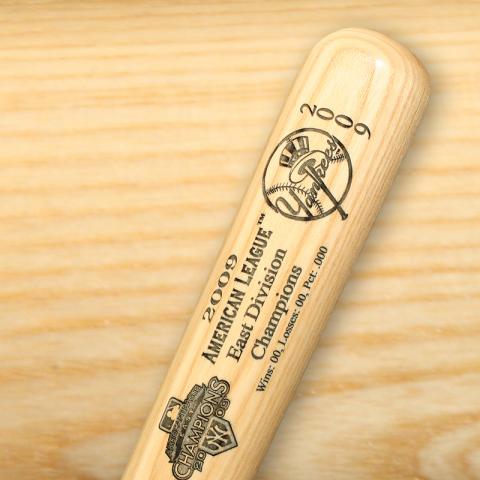 Christmas delivery guaranteed on all items ordered thru Dec. 20. Year in and year out, New York fans expect championships. The Yankees took the first step on the road to a World Title by capturing the 2009 American League Eastern Division Championship. To commemorate the team’s 2009 Division Title Louisville Slugger created this Authentic New York Yankees 2009 AL East Champs commemorative bat for fans. This limited edition collectible bat is manufactured by Louisville Slugger in the same manner as every other bat used by Major League Baseball hitters on teams around the country. To celebrate the 2009 Division Championship Yankees fans are expected to generate strong demand for this authentic Louisville Slugger collectible bat. Order yours today. Performances by A-Rod and Jeter, Chamberlain and Rivera, Posada and Cano – along with new additions to the team like Swisher and Texeria – ensured the Yankees were able to dethrone the defending champ Rays and keep the arch rival Red Sox out of the top spot in the east. So many great performances by this roster of Yankees have made this inaugural season of the new Yankee Stadium one to remember. This authentic Louisville Slugger 2009 AL East Champions commemorative bat is a great way to celebrate the season. Due to the limited nature of this collectible we will charge your credit card for the full amount of your purchase immediately upon receiving your order. We will confirm your order by Email. This bat is not game used. Please allow 4 to 6 weeks for delivery.