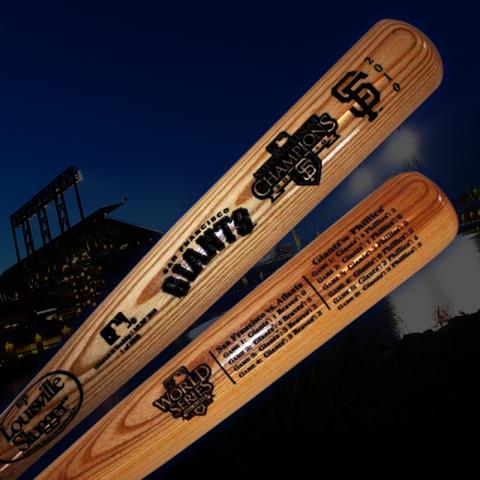 THIS IS NOT THE WORLD SERIES CHAMPIONSHIP  BAT. The San Francisco Giants are on their way to the World Series for the first time since 2002! To help Bay Area fans celebrate their team’s victory over the Phillies in the NLCS to claim the National League Pennant we are very excited to offer this Limited Edition National League Champions San Francisco Giants Authentic Louisville Slugger. With great performances from all parts of the roster, the Giants dispatched the Phillies and now set their sights on the biggest prize in baseball – A World Series Championship. Loyal Giants fans are generating great demand for Championship Season Memorabilia so you are encouraged to place your order for this authentic Louisville Slugger now. This authentic Louisville Slugger honoring the National League Champion Giants was turned and treated using the same manufacturing process done for all the bats used by Major League hitters. This special Limited Edition Championship Bat is laser engraved with the NL Champions logo, the Giants’ team log and the scores of each of the games played in the 2010 NLCS between the Giants and the Phillies. Do not let this great opportunity pass you by; order your bat today and display this handsome piece of Giants Championship memorabilia on the wall in your home or office.  Due to this collectible’s limited availability we must charge your credit card for the full amount of this order immediately upon receipt in order to reserve your authentic Championship bat. We will confirm your order by Email. This bat is not game used.