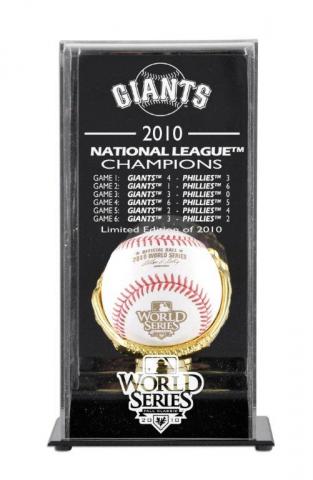 Note – this is the NL Champions ball display set, and NOT the World Series Champion ball display set. We cannot make substitutions as the official World Series Champions ball and display is a different price. Despite facing the 3-time defending National League Champions in the 2010 NLCS, the San Francisco Giants put together a great display of team baseball to capture the NL Pennant and punch their ticket to the 2010 World Series. To honor this team’s great season we have created this very special San Francisco Giants Official World Series Baseball & Display with which Bay Area fans can obtain for their collection of Championship Season memorabilia.This is a Limited Edition collectible for which Giants fans are generating swift demand – order today to reserve your Official World Series Baseball honoring the 2010 San Francisco Giants. This is an official World Series Baseball in a classic 10″ x 5″ x 5-1/2″ display case with a mirrored back, etched with the World Series logo, the Giants’ team logo and the final score of each game played in the 2010 National League Championship Series in which the Giants defeated the Phillies. This handsome and traditional piece of Championship Season memorabilia makes the ideal focal point of any collection, and is the perfect way to commemorate a great season. Order yours now because we do not expect this Limited Edition piece to remain available for very long. Due to this collectible’s limited availability we must charge your credit card for the full amount of this order immediately upon receipt in order to reserve your official World Series Baseball and Display. We will confirm your order by Email. This ball is not game used.