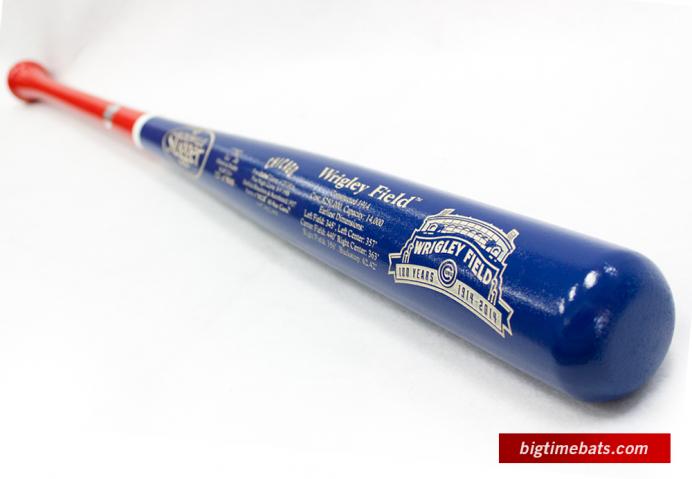 On April 23, 1914, the ball park at the corner of Clark and Addison in Chicago made its debut. First known as Weegham Park and then Cubs Park, Wrigley Field has served as home to the Chicago National League Baseball Team and remains an iconic monument for baseball fans across the country. As the 2014 season begins Wrigley Field celebrates its 100th Anniversary, and to honor one of baseball’s most historic stadiums Louisville Slugger created this very special, full-size Two Tone Bat laser engraved and gold embossed with a stadium outline, special commemorative dates and other important statistics. Bats are then hand-painted for superior finish and appearance. Louisville Slugger has created bats for Major League hitters since 1884 and considered by many the finest crafter of both game and collectible bats. Their tribute to Wrigley Field’s 100th Anniversary is yet another example of the superior craftsmanship that has come from that mill for over 100 years. This special milestone collectible bat is a 5,000 piece Limited Edition series; loyal Cubs fans and collectors of special memorabilia are expected to generate strong demand for this beautiful specimen. Due to the Limited Edition nature of this item we must charge your credit card for the full amount immediately upon taking your order. This policy ensures we reserve a bat from the series for you. We will confirm your order by Email. This bat is not game used. Please allow at least 4 to 6 weeks for delivery.