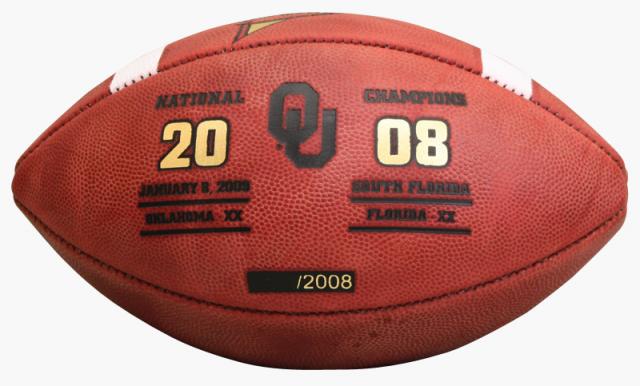 All season long the Oklahoma Sooners stood poised to claim their place atop the College Football ranks. With their victory over the Florida Gators in the season-ending BCS Championship Game, the Sooners and their fans can claim that spot at the top along with the title, “Champions.” To celebrate the BCS Championship earned by the University of Oklahoma Sooners we are proud to offer this BCS Champions Commemorative Game Ball with Sooners logo and the score from Thursday’s game gold embossed on a special panel. This is a Limited Edition commemorative football so place your order today. The Sooners were led by 2008 Heisman Trophy winner Sam Bradford, but a number of Sooners turned in terrific performances all season long as they marched to the BCS Title. Head Coach Bob Stoops kept the team focused following an early loss to rival Texas, and guided the Sooners to the Big 12 Title and into the National Championship Game. This very special Commemorative Game Ball is the perfect collectors’ piece to celebrate the Soooners’ 2008 season. Only 2,008 of these special BCS Championship balls are available so you must place your order now. This is an authentic Wilson football, the same model used in NCAA football games and is the official football of the BCS Championship Game. The commemorative third panel was added to honor the BCS Champion University of Oklahoma Sooners. This ball is not game used. This Commemorative BCS Champions Game Ball is only $129.95, plus $15 shipping, and will look great in your home of office. Due to the limited nature of this item we will charge your credit card immediately upon receiving your order so as to reserve your ball. Please allow 4 to 6 weeks for delivery.