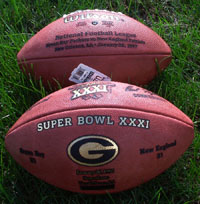 As Packers fans celebrate their teams Super Bowl XLV Championship, we are pleased to present the Game Ball from the team’s win in Super Bowl XXXI. This is the Super Bowl XXXI game ball with a third commemorative panel added to the ball to commemorate for the first time the Packers historic championship on an actual game ball. The ball on the first panel will feature the facsimile signature of the commissioner the Super Bowl logo. The second panel will have the Wilson logo and the words National Football League Green Bay Packers vs New England Patriots New Orleans, LA January 26,1997. The third added panel has gold embossed words Super Bowl XXXI Champions, the Packers logo, the score of the game, Green Bay 35 New England 21. This is the same ball used in Super Bowl XXXI with the added third panel to commemorate the Packers historic championship. Wilson is the official football of the NFL. This is the highest quality football made. This is an exclusive offer that is not available in stores. Due to the limited number of these balls we must charge your credit card for the full purchase amount immediately upon receiving your order to ensure we reserve your football. We will confirm your order by Email. This ball is not game used.