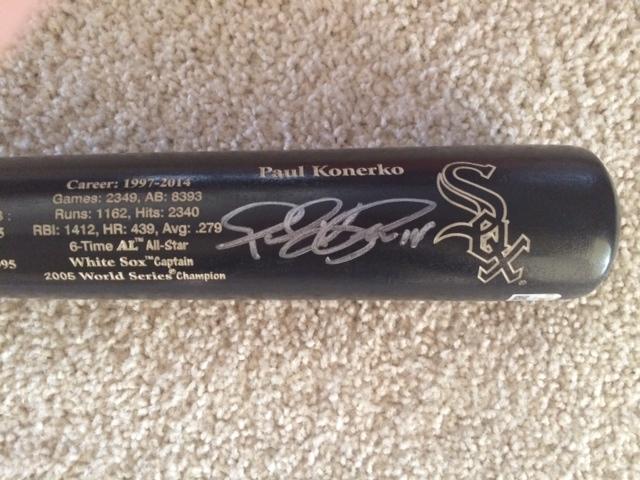 BIG TIME BATS has secured a limited number of commemorative bats signed by Chicago White Sox slugger Paul Konerko, and engraved to commemorate Paulie’s retirement and incredible career. These full-size bats feature Konerko’s career stats and his authenticated signature. . Playing most of his career with the Chicago White Sox, Konerko was an integral part in winning the franchise’s first World Series Title since 1917.  Konerko had a strong World Series by homering and driving in four runs in a four-game sweep of the Houston Astros, and led the team in RBI during the Fall Classic. Konerko’s leadership and strong play on the field resulted in the honor of being named team captain in 2006, a designation that is rarely bestowed.  He led the White Sox as team captain up until his retirement.  He is a 6x All Star, 2005 World Series Champion, and was the 2005 ALCS MVP. Each bat will be individually numbered and authenticated by MLB.  Each bat will be personally signed by Paul Konerko and will be engraved as follows:  Leadership Stats: Double Plays Turned as 1B: (AL) 2004: 136, 2005: 135, 2007: 131 AL Fielding % as 1B: .995 Career: 1997-2014 Games: 2349, AB: 8393 Runs: 1162, Hits: 2340 HR: 439, Avg: .279 6-Time AL All-Star White Sox Captain 2005 World Series Champion Due to the limited nature of this offer we must charge your credit card for the full price immediately upon taking your order. This policy ensures we reserve a bat for you. We will confirm your order by Email. These bats are not game used.