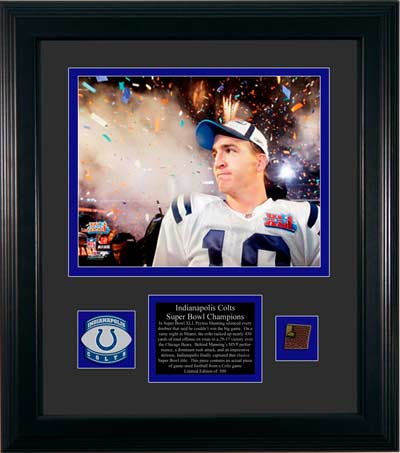 LIMITED EDITION SUPER BOWL XLI MVP PEYTON MANNING COMMEMORATIVE FRAMED PHOTO The Indianapolis Colts won Super Bowl XLI and Peyton Manning was honored as the game’s Most Valuable Player! You can celebrate these crowning achievements with the addition of the beautifully framed commemorative photo to your collection of authentic sports memorabilia. This limited edition framed photo features a picture of Colts quarterback and Super Bowl XLI MVP Peyton Manning taken only minutes following the conclusion of the game, an actual piece of game-used football from a Colts game, an Indianapolis Colts medallion and commemorative plaque. Order yours today! Long believed by many to be among the game’s greatest signal-callers, Peyton Mannnig guided the Colts offense in the team’s victory over the Chicago Bears in Super Bowl XLI. This collectible piece is displayed on a blackwood frame and measures 15″ x 17″. This is a limited edition piece; only 500 are available so order yours today! The plaque on this piece reads: Indianapolis Colts Super Champions – In Super Bowl XLI, Peyton Manning silenced every doubter that said he couldn’t win the big game. On a rainy night in Miami, the Colts racked up nearly 450 yards of total offense en route to a 29-17 victory over the Chicago Bears. Behind Manning’s MVP performance, a dominant rush attack, and an impressive defense, Indianapolis finally captured that elusive Super Bowl title. This piece contains an actual piece of game-used football from a Colts game. Limited Edition of 500. LIMITED EDITION OF 500! Your credit card will be charged immediately upon placing your order so we can reserve your LIMITED EDITION collectible. This is an exclusive collectible that is NOT AVAILABLE IN STORES! Loyal and avid fans of the Indianapolis Colts will generate strong demand for this limited edition collectible so order yours today!