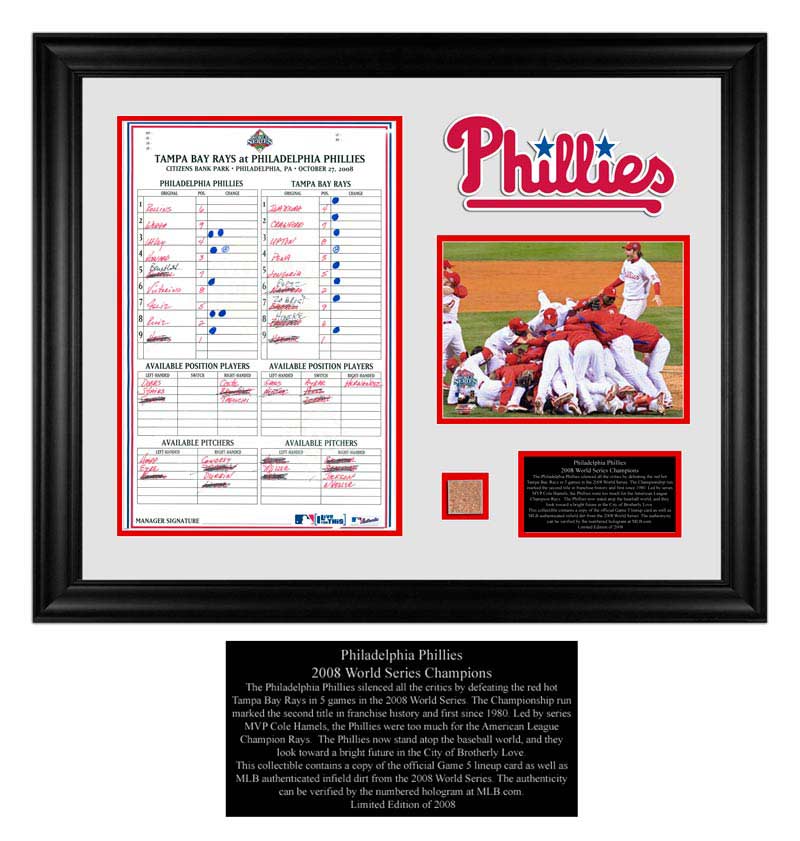 Separated by a day due to rain, Game 5 of the 2008 World Series was a nip and tuck affair that finally saw the crowing of the Philadelphia Phillies as the Champs. This rare collector’s piece features a copy of the Line Up card used in that game and is available as a very LIMITED EDITION collectible for true Phillies fans. This is a very rare piece of memorabilia that every collector will want, but only few will get. Just 2008 pieces of this edition are available. Behind stellar performances by Series MVP Cole Hamels, Brad Lidge, Jimmy Rollins, Shane Victorino, Ryan Howard, Joe Blanton and several other Phillies, the Phillies defeated the Rays by a count of 4 games to 1. This handsome 23″ x 27″ beautifully framed collectible piece of history features a high resolution copy of the actual Game 5 line up card and includes a photo from the on-field celebration after the Series win, authentic infield dirt collected after Game 5 and an etched plaque commemorating the team’s performance. The plaque reads as follows: Philadelphia Phillies 2008 World Series Champions The Philadelphia Phillies silenced all the critics by defeating the red hot Tampa Bay Rays in 5 games in the 2008 World Series. The Championship run marked the second title in franchise history and first since 1980. Led by series MVP Cole Hamels, the Phillies were too much for the American League Champion Rays. The Phillies now stand atop the baseball world, and they look toward a bright future in the City of Brotherly Love. This collectible contains a copy of the official Game 5 lineup card as well as MLB authenticated infield dirt from the Championship clinching game of the 2008 World Series. The authenticity can be verified by the numbered hologram at MLB.com. Limited Edition of 2008 There is no other collectible quite like this piece! Only 2008 Framed Line Up Cards from Game are available so place your order now. Order your piece of history now before they are all sold out! LIMITED EDITION SO ORDER YOURS TODAY! To reserve your Limited Edition collectible we will charge your credit card for this item when you place your order.