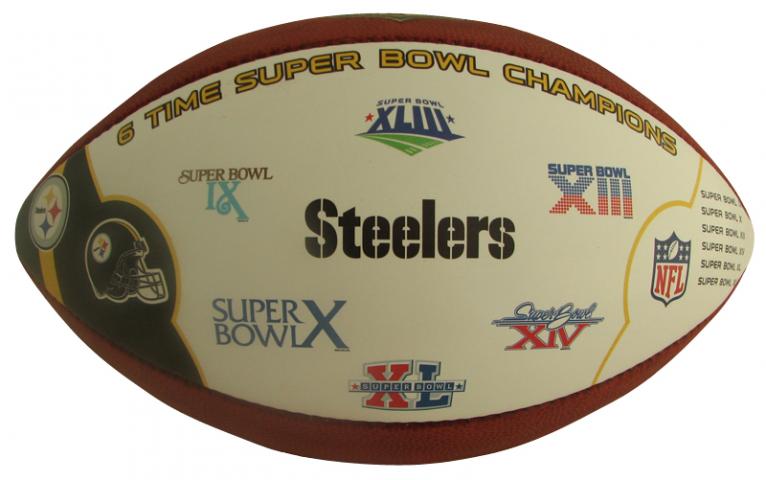 The Pittsburgh Steelers now reign as the NFL franchise with the most Super Bowl Championships. Upon defeating the Arizona Cardinals in thrilling fashion to capture Super Bowl XLIII, the Steelers laid claim to the team’s SIXTH Super Bowl … a feat unmatched by any other team. To honor this legendary franchise’s claim to history Wilson has just released the Pittsburgh Steelers Super Bowl Champions Dynasty Football, which features a very special commemorative white panel showcasing the Super Bowl logos for each of Pittsburgh’s wins. Because no other team can make this claim Steelers fans will generate strong demand for the special collectible football so you must place your order now – only 2,008 of the Steelers Dynasty footballs are available. Every football comes with an individually numbered certificate from Wilson & Spikefootball This ball retails for $129.95, but as our way of saying “thank you” to past customers for  a record-breaking year in the midst of a weak economy Spikefootball can offer you this ball for only $99.95 when you enter an order no. in the Promo Code box when you place your order. Spikefootball is very grateful to its customer base for their loyalty, and this very special offer is just our way of saying, “thanks!” Order your ball today and take advantage of this money-saving promotional offer. The Steelers have beaten the likes of the Vikings (IX), Cowboys (X, XIII & XXX), Rams (XIV), Seahawks (XL) and now the Arizona Cardinals en route to winning an NFL best six Super Bowl Championships. Heroes such as Bradshaw, Stallworth, Swann, Harris, Greene, Blount, Roethlisberger, Bettis, Ward, Holmes, Polamalu and others donning the black and yellow thrilled Steelers nation in each of these great victories. This one special ball celebrates each of these titles. This Pittsburgh Steelers Super Bowl Champions Dynasty Football is a limited edition item, and each ball comes with an individually number certificate. Due to the limited nature of this product we will charge your credit for the full amount upon receiving your order to reserve your football. We will confirm your order by Email. This ball is not game used. Please allow 4 to 6 weeks for delivery.