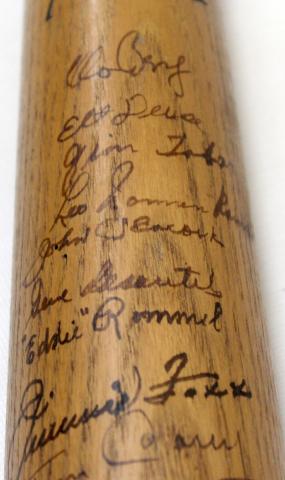 This is the most interesting bats we have offered, featuring a collection of autographs by some of the game?s greatest players on the barrel. What makes this item unique is that at some point the owner ?shaved? this Jimmy Foxx model bat and added another 31 signatures to the flat side. It is suggested that the reason for ?shaving? the bat was to create space for more autographs. Among the 40 player who signed this rare Jimmy Foxx store model 34? cut or ?shaved? bat are 40 members of the 1940 Boston Red Sox, including Hall of Fame members Jimmy Foxx, Ted Williams (in just his 2nd season with the team), Mgr. Joe Cronin, Lefty Grove and Bobby Doerr. Other notable team members signing include Moe Berg, Andy Carey and Tom Daly. The signatures appear to have been collected on this bat during the team’s 1940 season Spring Training session in Sarasota, Florida. This bat comes with a Full Letter of Authenticity from James Spence Authentication! In its original condition this bat might fetch upwards of $40,000 on the market, but might possibly not have included as many signatures. Vintage bats remain in high demand and Jimmy Foxx autographed bats are difficult to find ? a single signed Foxx baseball sells for $36,000. The only known Foxx game-used bat is on display at the National Baseball Hall of Fame. One other notable fact: Moe Berg is the ONLY Major League Baseball player with a card on display in CIA Headquarters. In addition to a fine 15-year career with the Red Sox, White Sox and New York Robins, Berg served as a spy for the OSS during World War II. Due to the extremely rare nature of this bat we must charge your credit card for the full amount immediately upon taking your order. This policy ensures we reserve the bat for you. We will confirm your order by Email. This bat is not game used. Please allow 3 to 4 weeks for delivery.