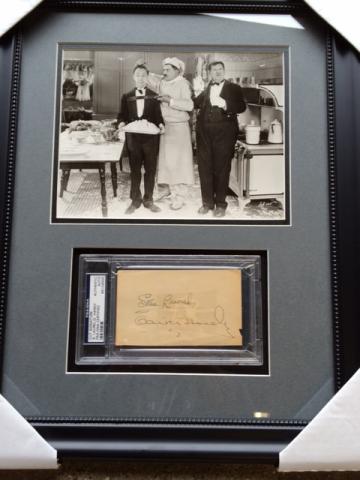 The charmed audiences with their unique brand of humor and timing during the infancy of movie making, and soon became legends of the industry. This very special piece available here would make fine addition to any collection or simply create lasting memories for any cinema buff. This photo presentation includes a 3″ x 5″ off-white sheet signed by Stan Laurel and Oliver Hardy as well as an original photograph of Laurel and Hardy from their film From Soup to Nuts. The signed sheet is authenticated and encapsulated by PSA/DNA. The photo and autograph presentation are framed together to create an amazing and rare piece of American history. Stan Laurel and Oliver Hardy (Lauren and Hardy) were a beloved comedy double act during the early Classical Hollywood era of American cinema. Within a year of their first joint appearance, they were touted as the new comedy team. Transitioning from silent to talking film, they appeared in over 100 films.  The duo quickly gained notoriety for their “tit-for-tat” fights and their signature tune “The Cuckoo Song”.  The duo even won an Oscar for “The Music Box”.  The duo and their work is valued and honored even to this day. Laurel and Hardy Museums are located in Georgia as well as Cumbria, England, the birthplace of Stan Laurel. The official Laurel and Hardy appreciation society is known as “The Sons of the Desert,” was named after the fraternal society depicted in a Laurel & Hardy film of the same name. Their works have been released in numerous theatrical reissues, television revivals, 8-mm and 16-mm home movies, feature-film compilations and home videos. Due to the rare nature of this offer we must charge your credit card for the full amount immediately upon taking your order. This policy ensures we reserve the framed presentation for you. We will confirm your order by Email. Please allow at least 2 weeks for delivery.