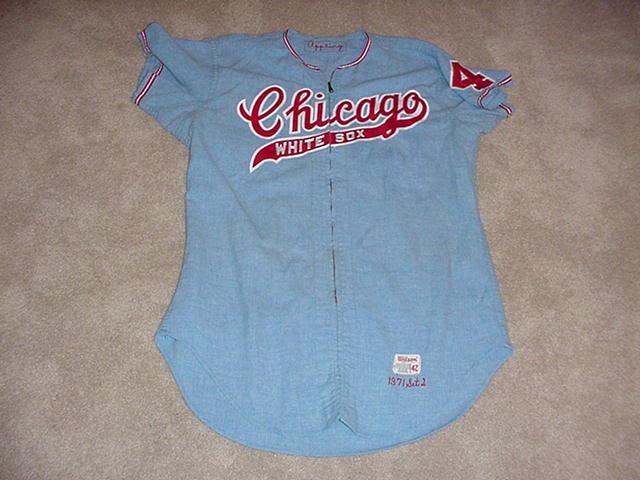 One of the most adored White Sox players of all time, Luke Appling played 20 seasons with Chicago’s South Side team, from 1930 through 1950 after being initially passed over by the city’s other team. Appling played shortstop for the White Sox and is the club’s all team leader in games played, at bats, hits, doubles, runs and walks. Following his playing days he stayed in the game as both a coach and manager. This RARE flannel design coach’s jersey, which is very popular among collectors, was worn by Appling during his final season on the White Sox bench in 1971 and features a number of unique characteristics. Red and White sewn two-color indentifiers on front and back, including Luke’s famous retired #4. Rare, full-zipper front, as well as the Wilson size 42 tail tagging chain-stitched in red with “1971 Set 2” identifiers. Appling’s last name also appears in red chain-stitching in the collar matching known team exemplars. This coaching jersey remains in excellent condition with quality wear evidence throughout. The game specimen is all original, save for the team logo on front, which was professionally restored, possibly after the team thought better of recycling the jersey of a known living legend. Appling was inducted into Cooperstown in 1964 and his number 4 was retired by the White Sox in 1975. His image graces the outfield wall of the team’s new ballpark along with a number of other team legends. Appling retired from the White Sox staff following the 1971 season making this one of the last White Sox jersey’s he ever wore. This is a rare collectible that no White Sox fan or baseball historian will want to pass up. Overall, this is an absolutely breathtaking early 70’s White Sox jersey design worn by one of team’s all time greats. Keep in mind that an Appling game flannel from his playing days in the 1930’s or 40’s could easily fetch upwards of $50,000. This jersey is authenticated by game jersey expert Lou Lampson. Do not accept substitutes or bad replicas – get the real thing from the Daily Bat Man Special available exclusively at BigTimeBats.com. Order it right now online!