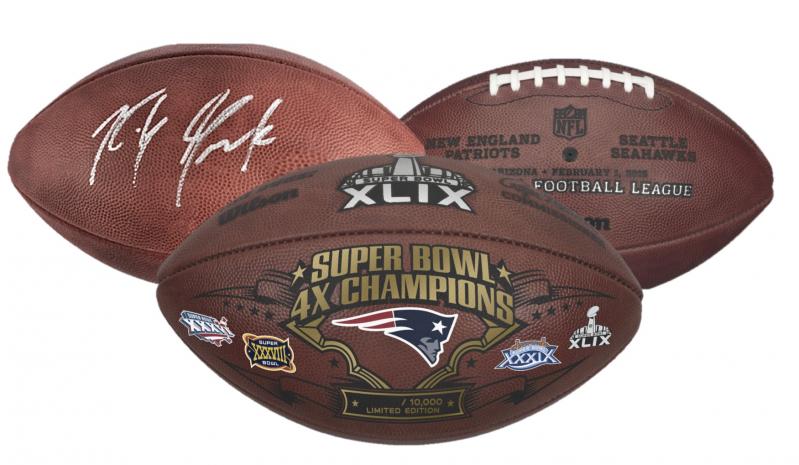 BIG TIME FOOTBALLS has released a limited number of Rob Gronkowski signed Authentic Wilson Super Bowl XLIX Game Balls.This authentic Wilson football is the same model used in the Super Bowl and features a special commemorative panel honoring the 4 Time Super Bowl Champion New England Patriots. In one of the most stunning finishes to any Super Bowl, the Patriots defeated the Seattle Seahawks 28-24.Gronkowski played an important role in this Super Bowl victory, with six receptions, 68 yards and a touchdown catch.Gronkowski had a sensational 2014 season, reaffirming his status as the most dominant tight end in football. Gronkowski is the first tight end to catch ten TDs in four seasons, he had the most TD receptions by a tight end in a season (17 in 2011) and he had the most receiving yards by a tight end in a season (1,327 in 2011).   This Wilson Game Ball is personally signed by Rob Gronkowski.Each ball will be individually numbered and authenticated by Fanatics or PSA/DNA. Logos, dates and scores are beautifully embossed on each ball. This authentic Wilson Game Ball is the ideal Championship Season collectible for every Patriots fan. Get yours while they last. Due to the limited nature of this offer and the anticipated demand for this autographed football we ask that you use the form provided below to contact us with your interest for this great piece of Super Bowl memorabilia. We will email you to confirm your order and finalize your order. Do not pass up this great opportunity. This is a limited offer so order yours now.