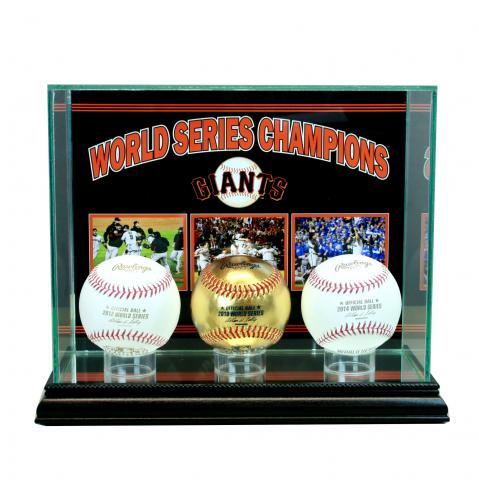 The San Francisco Giants have three World Series Championships in the past five years. Their run of titles is the most impressive in all of sports over the past decade. Big Time Bats is proud to announce the new release of this officially licensed Three Ball Set and Display Case featuring a Commemorative Baseball from each of the 2010, 2012 and 2014 World Series. This unique set includes a one-of-a-kind 2010 World Series GOLD Ball – created using nanotechnology during which engineers melt 24-karat gold bullion and artfully infuse the metal into the leather hides of the official MLB Rawlings baseballs.  Each GOLD Ball comes with a certificate from Swiss Company SGS guaranteeing its 24-karat gold authenticity.  The baseballs are presented in a very unique 3 ball custom glass case that features images of the World Series victories moments after the final outs were recorded.  The logo patches from each World Series victory are also displayed. This is a once in a lifetime limited edition release that is expected to generate strong demand among the millions of loyal Giants fans. Order your set today before they are gone forever. Due to the limited release of this item we must charge your credit card for the full amount immediately upon taking your order. This policy ensures we reserve a set for you. We will confirm your order by Email. Please allow 4 to 6 weeks for delivery. Baseballs are not game used. Science behind the Gold: So how does 24 Karat Gold get fused into an MLB Baseball?  The Gold is applied by a vapor deposition technology frequently used in today’s semiconductor industry. Known as “Sputtering,” the process ejects atoms from a target source material (gold) and deposits those atoms into a substrate (leather).  A vacuum chamber machine is first filled with an inert gas that applies a negative charge to pure 24-karat gold bars – causing the gold to melt down into its atomic form. The gas ions accelerate towards the machine’s magnets, carrying enough energy to knock off or “sputter” some of the gold. The magnets then direct sputtered gold onto the American leather hides.  The sputtering technology is 100 percent environmentally friendly and leaves the leather feeling soft and untreated. Unlike plating or foil, the deposition process does not affect the ball’s natural state.