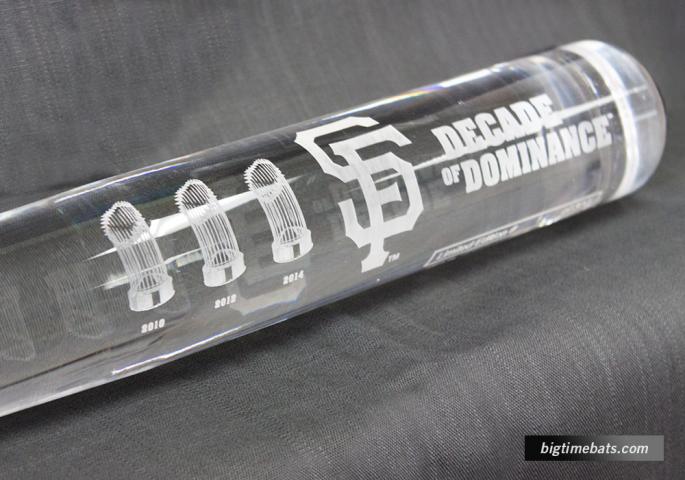 A run of dominant success like that enjoyed by the San Francisco Giants deserves a fine collectible – a piece of memorabilia unlike anything previously released. We are proud to announce the release of the very special “Decade of Dominance” Translucent Bat honoring the Giants’ three World Series Titles in 2010, 2012 and 2014. This is the first of its kind bat officially licensed by Major League Baseball. This all acrylic bat features a fine, crystal-like appearance and is laser etched with the phrase, “Decade of Dominance,” the SF Giants logo and three World Series Championship trophies with the years 2010, 2012, and 2014. This 5 lb. bat looks fantastic, but may shatter like glass if dropped. It is a rare and precious piece of memorabilia commemorating one of baseball’s most recent runs of dominance. Order yours today before they are gone. Due to the limited release of this item we must charge your credit card for the full price immediately upon taking your order. This policy ensures we reserve a bat for you. We will confirm your order by Email. Please allow 8 to 10 weeks for delivery. The bat is translucent and has a crystal like appearance and is very attractive and weighs 5 lbs.   However if dropped the bat may shatter like glass.