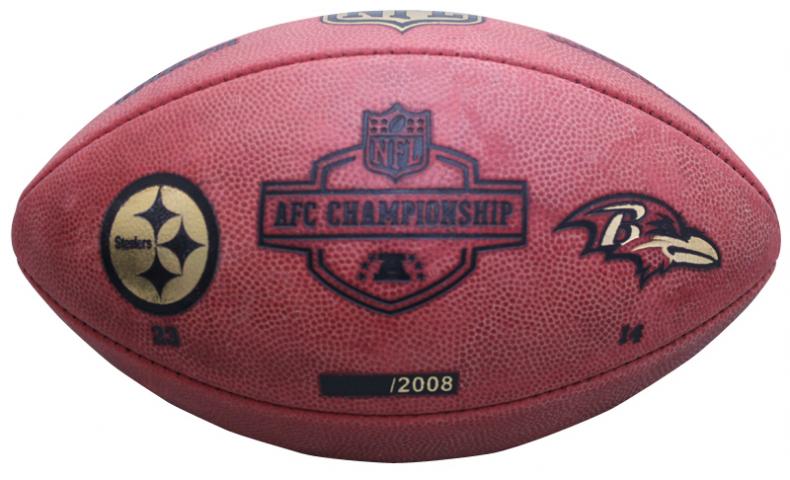 The Pittsburgh Steelers and the Baltimore Ravens had met twice already this season, with the Steelers coming out on top both times. The Ravens did their best to control the 3rd meeting between these two teams, but the Steelers came out on top and will represent the AFC in Super Bowl XLIII on Feb. 1, 2009, in Tampa. To commemorate this battle between AFC Central rivals, and the first AFC Championship won at Heinz Field, Wilson has released the 2009 AFC Championship Commemorative Game Ball. This is the same ball used in this historic championship game, except a third panel was added featuring embossed logos of the participating teams and the AFC. The ball you receive will include the score from Sunday’s game. Fans will generate strong demand for this historic collectible so you will need to place your order now. Only 2,008 balls are available. Both teams delivered devastating hits during Sunday’s game. The playoff experience on both sidelines was apparent and the All-Pro players on both rosters played up to expectations. The home field advantage an turnovers seems to make the difference. The Pittsburgh Steelers have a long history of Super Bowl appearances, and now have their eyes turned toward Tampa and Feb. 1st meeting with the Arizona Cardinals. This authentic Wilson AFC Championship Commemorative Game Ball is a limited edition so you must place your order now. This LIMITED EDITION 2009 AFC Championship Game Ball is the perfect collectible for fans of both teams. You must place your order now to ensure you receive your AFC Championship Commemorative Game Ball. This Wilson football is the same ball used in the AFC Championship Game. A commemorative third panel was added to honor the Steelers and Ravens, and the battle to represent the AFC in Super Bowl XLIII. This ball is not game used. This ball will look fantastic in your home or office. Place your order now. Due to the limited edition nature of this football we will charge your credit card for the full amount and shipping charge immediately upon receiving your order to ensure you receive your limited edition collectible. Please allow 4 to 6 weeks for delivery.