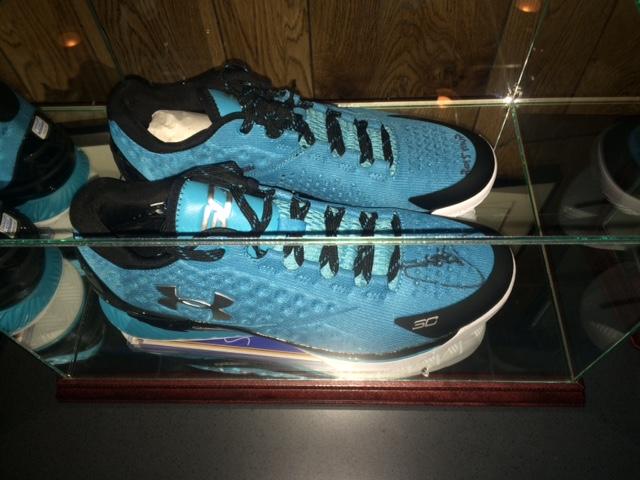 Big Time Bats is proud to release these exclusive Curry One Carolina Low Top Blue Shoe Pairs signed and inscribed by Steph Curry. These are the first ever Curry One low cut shoes that have been released to the public. So named “Carolina Blue” after Curry’s the team colors of the Carolina Panthers who play in his hometown of Charlotte, North Carolina. The shoes are size 13, Curry’s actual foot size. The shoe alone has long been sold out at Under Armour and only 30 pairs were ever signed and inscribed by Curry. These shoes cannot be found anywhere. To put the exclusivity of this shoe in perspective, imagine owning a pair of original Air Jordan I signed and Inscribed by Jordan – after only 20 pairs were made. Golden State won its first NBA Championship in 40 years defeating the Cavaliers 4 games to 2 last month. Led by Steph Curry, the 2014-2015 League MVP showed off his skills on the biggest stage averaging 26 points per game, 6.3 assists per game, and 5.2 rebounds per game. Curry became a star in his 6th NBA Season by leading the Golden State Warriors to an NBA best 67 wins and championship. Curry made his 1,000th 3 point field goal on 1/7/2015 becoming the fastest player in NBA history to accomplish the feat. Curry also broke his own record this year for most 3 point field goals in a season with 286. He is a 2x NBA All-Star. When you place an order you receive a pair of signed & inscribed shoes, the original shoe box, a handsome display case and photo of Steph Curry taken during the signing event. Also comes with “Steph Curry Authentication.” Due to the very limited nature of this offer we must charge your credit card for the full price immediately upon taking your order. This policy ensures we reserve a pair of the signed shoes for you. We will confirm your order by Email. These shoes were not game worn. Please allow 2 to 3 weeks for delivery.