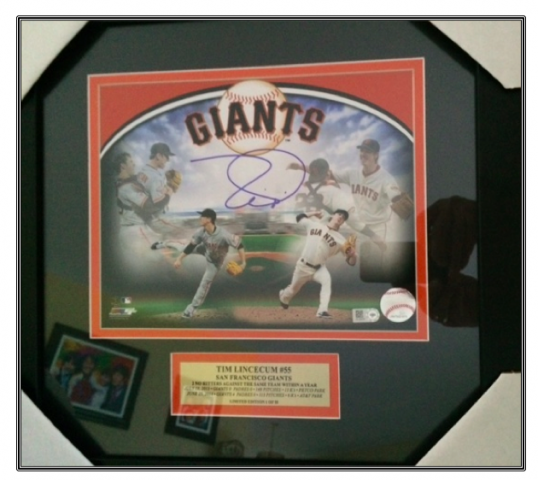 On June 25, 2014, San Francisco Giants pitcher Tim Lincecum threw his second career no-hitter at AT&T Park against the San Diego Padres. Lincecum also No-Hit the Padres on July 13, 2013 and became just the second pitcher to throw multiple No-Hit games against the same team. With his performance against the Padres, Lincecum also joined Sandy Koufax as the only other pitcher to have won multiple World Series, multiple Cy-Young Awards, and pitch multiple No-Hitters.  BIG TIME BATS has released a very special piece to commemorate Lincecum’s second career no-hitter. Lincecum has signed a Limited Edition of 55 commemorative full-color photos.  This beautiful, exclusive photo was created by Big Time Bats and Photofile.  Only 55 of these images were made and this photo will not be otherwise available in the marketplace.  The signed commemorative photo will be framed (15.5? x 15.5?) and include a commemorative plate with stats and the photo?s edition number.  Each commemorative framed photo presentation will be individually authenticated by MLB. Each commemorative plate will read the following: TIM LINCECUM  #55 SAN FRANCISCO GIANTS 2 NO HITTERS AGAINST THE SAME TEAM WITHIN A YEAR JULY13,2013 GIANTS 9 PADRES 0 148 PITCHES 13K’S PETCO PARK JUNE 25TH GIANTS 4 PADRES 0 113 PITCHES 6 K’S AT&T PARK LIMITED EDITION __ OF 55Due to the limited nature of this offer we must charge your credit card for the full price immediately upon taking your order. This policy ensures we reserve a piece from the series for you. We will confirm your order by Email. Please allow 4 to 6 weeks for delivery.