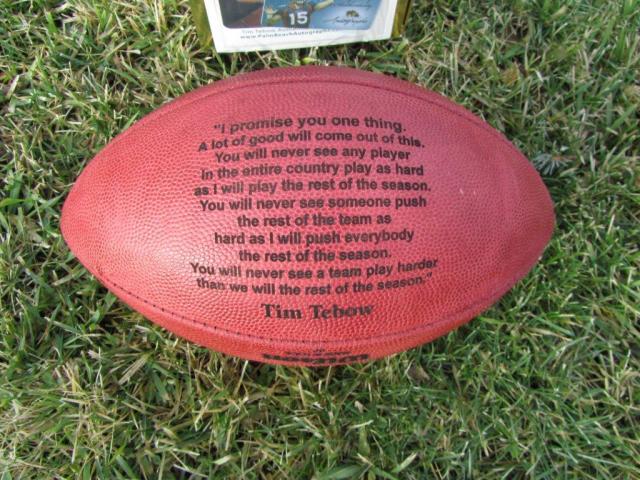 On September 27, 2008, following a loss to the Rebels of Ole Miss, University of Florida Gators quarterback Tim Tebow vowed to his teammates and Gators fans that he would work to prepare for every game from that point forward. His words became known as “the Promise.” This is an official Wilson NFL Football autographed by current Denver Broncos quarterback Tim Tebow and laser engraved with “the Promise,” the words Tebow spoke that fateful afternoon. “I promise you one thing. A lot of good will come of this. You will never see any player in the entire country play as hard as I will play the rest of the season. You will never see someone push the rest of the team hard as I will push everybody the rest of the season. You will never see a team play hard than we will the rest of the season.” It was after Tebow made this pledge that the Gators went on a winning streak that ended in a National Championship victory over Sam Bradford and the Oklahoma Sooners.  The ball, the laser engraved “pledge” and Tebow’s authenticated autograph – not to mention the fantastic season he’s having this year in Denver – make this ball a fantastic addition to any football fan’s collection. This ball comes with a photo of Tim Tebow signing the ball, as well as a Certificate of Authentication. This is a LIMITED EDITION item that we do not expect to be available for long. As this is a one-of-a-kid offer we must charge your credit card for the full amount immediately upon receiving your order. This will ensure we reserve the ball for you. We will confirm your order by Email. We have this ball in stock now and will ship it out immediately.