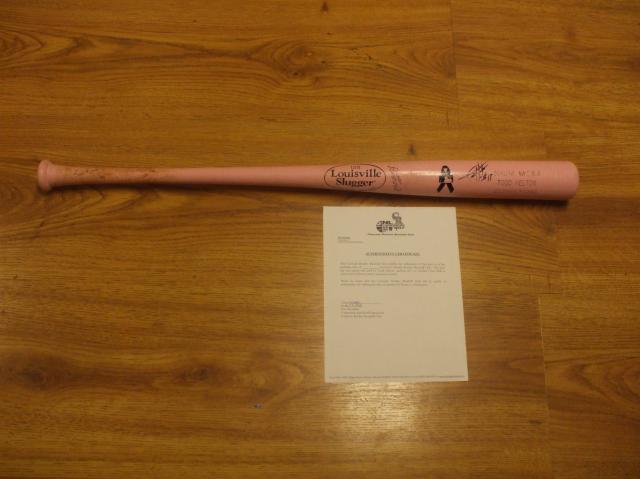 The Rockies fell just short of their quest to join Baseball’s postseason, but the team provided their fans with a great season. Today’s Exclusive Daily Bat Man Special features the game-used bat autographed by one of the Rockies’ fans favorites. This is a Game Used Bat from the 2008 season, which Todd Helton autographed after taking it out of play. Todd Helton used this bat during the Rockies game on Mother’s Day in 2008. It is a pink bat manufactured by Louisville Slugger to help raise Breast Cancer Awareness. Many players still use their own bats, but Helton not only used this bat during that game, but game-use evidence is visible in a number of places. This bat features ball and bat rack marks, and pine tar on the handle. The no. 17 is written on the knob with black marking pen. This bat comes with an official Letter of Authenticity from the Colorado Rockies. This is a very rare and very unique Todd Helton gamer. Rockies fans and collectors of game-used memorabilia will act quickly to secure this prized specimen.