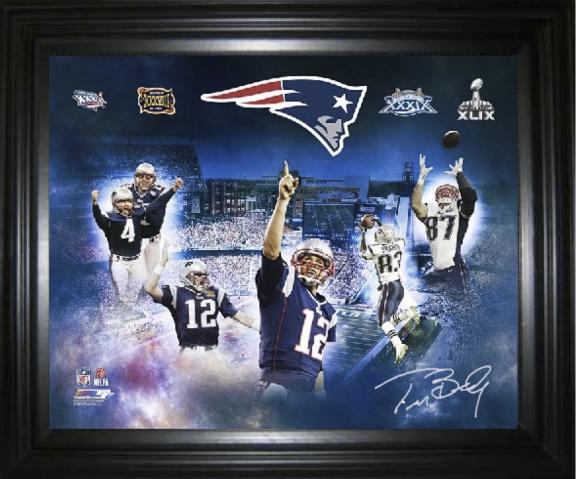 BIG TIME FOOTBALLS has released a very limited number of signed Authentic Super Bowl Champion canvases (16”x20”), which are beautifully framed and autographed by Tom Brady. Each canvas will be individually numbered and authenticated by Tristar. This autographed canvas depicts the four Super Bowl Championships (XXXVI, XXVIII, XXXIX, and XLIX) won with the directive of Tom Brady, with logos of all four Super Bowls, and photographs of fellow teammates, including placekicker Adam Vinatieri (#4), who contributed to three of these four Super Bowls with Brady, two-time Super Bowl Champion Deion Branch (#83), and Rob Gronkowski (#87), key influence in the Patriots’ XLIX Super Bowl Championship. This authentic autographed and framed canvas is the ideal Championship Season collectible for every Patriots fan. Get yours while they last. In one of the most stunning finishes to any Super Bowl, the Patriots defeated the Seattle Seahawks 28-24. In Brady’s 13 full seasons as a starter, the Patriots have earned six trips to the Super Bowl, winning four. He has also won three Super bowl MVP awards, two league MVP awards (2007, 2010), has been selected to ten Pro Bowls, and has led the Patriots to more division titles than any other quarterback in NFL history, with twelve. Brady is fifth on the all time list for career passing yards and fifth for career touchdown passes. Due to the limited nature of this offer and the anticipated demand for this autographed football we ask that you use the form provided below to contact us with your interest for this great piece of Super Bowl memorabilia. We will email you to confirm your order and finalize your order. Do not pass up this great opportunity. This is a limited offer so order yours now.