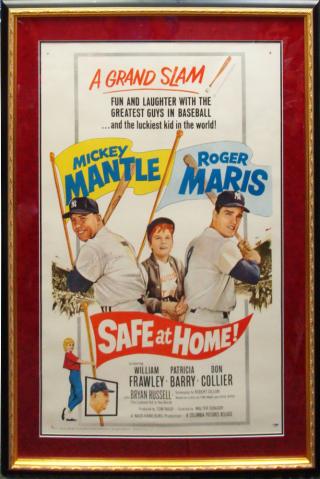 The M & M Boys took baseball by storm in 1961 as they both chased the iconic Babe’s single season home run record. To say Mantle and Maris were the toast of New York City would be a gross understatement. Both hit home runs almost daily, each would actually match the other in the same game several times as the pressure mounted to break perhaps the most important record in baseball history. In the end Mickey wound up with an infection and spent virtually the final two weeks of the season in the hospital, and ended the year with 54 round trippers ( #54 coming on Sept,23rd ). On October 1st Roger Maris hit home run number 61 in Yankee Stadium off Red Sox pitcher Tracy Stallard to break the Babe’s 34-year old record of 60 home runs in a single season. Needless to say, manufacturers and retailers converged on these two baseball icons and inundated them with endorsement offers—from pencils bearing their images and facsimile autographs to radios and even recordings of their voices. Perhaps the most unique, however, was a movie contract. Safe at Home was produced immediately after the 1961 season in an attempt to cash in on th players’ new fame. It certainly is not considered a movie epic by anyone’s standards, critics or otherwise, but it did star the M & M Boys, as well as teammates Whitey Ford, manager Ralph Houk, Joe Pepitone, and William Frawley (of My Three Sons fame). Even the Mick’s real life son, David Mantle, made a cameo appearance in the movie. Of course the movie was popular, but short lived. It’s seen occasionally on television these days, but few don’t realize these two Yankees—who by the way were close off-field friends— actually appeared in a full length feature motion picture. This is an exceptionally high grade example of this movie’s poster, which would have hung in movie houses at the time. These are rare, as most have been destroyed through attrition.The quality of this 21″ x 40″ poster is outstanding, but what makes this one exceptional is that it is actually autographed by Mickey himself. To our knowledge this is one of two autographed examples of this poster. We have yet to see more, which is precisely why we decided to purchase it. A word about Mickey and his signings. In and around the mid-1980s his “manager” decided he should not sign anything at shows or even private signings that was large in size or “out of the ordinary”. That meant he no longer would sign bats, jerseys, exceptionally large photographs, seats (yes we once handled one of them ), and of course movie posters. An exception was made in the last 2 or 3 years of his life when he signed his mega-deal with the Upper Deck Company. However, that exception only stood for jerseys and bats . (That is why you may see some of his signed bats and jerseys in the marketplace). Obviously, this poster was signed before that “ban.” In fact, it is not signed in sharpie pen, but rather in bold, black ballpoint pen. We cannot express how impressed we are with this piece of Mantle memorabilia. It is for the Mantle collector – shall we say the Mantle “aficionado” – who wants something special to feature in his office, den or as they now say”man cave.”   Due to the very rare and unique nature of this item we must charge your credit card for the full price immediately upon taking your order. This will ensure we reserve this Mickey Mantle signed movie poster for you. We will confirm your order by Email. This poster comes with a Full Letter of Authenticity from PSA/DNA. Please allow at least 2 weeks for delivery.