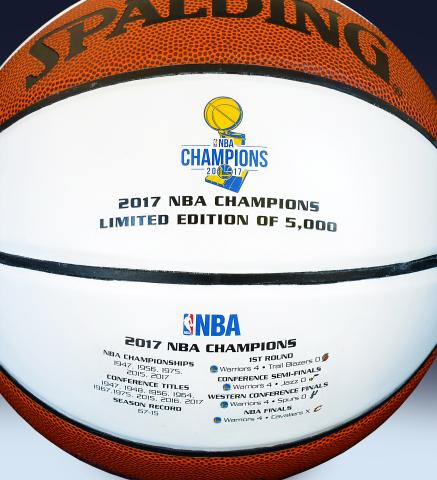 The Golden State Warriors are the 2016-17 NBA Champions, and have set a record by their first 15 games in the NBA Playoffs!  To celebrate their championship season, we are pleased to announce the release of this EXCLUSIVE Commemorative Championship Game Model Ball. Designed especially for Warriors fans, this collectible basketball is the same model as the ball used throughout the NBA regular season, playoffs, and Finals series. The ball comes with special panels that feature the Warriors’ championship logo, a list of the franchises’ championships, and series summaries of the 2017 NBA Playoffs. The Warriors made the playoffs look easy, sweeping each series on their way to a Finals rematch with the Cavaliers. Unlike last year, the Warriors proved to be too much for their Eastern Conference opponent and ended 2017 as Champions of the NBA. To ensure we reserve a ball for you we will charge your credit card for the full price immediately upon taking your order. We will confirm your order by Email. This ball is not game used. Please allow 4 to 6 weeks for delivery.