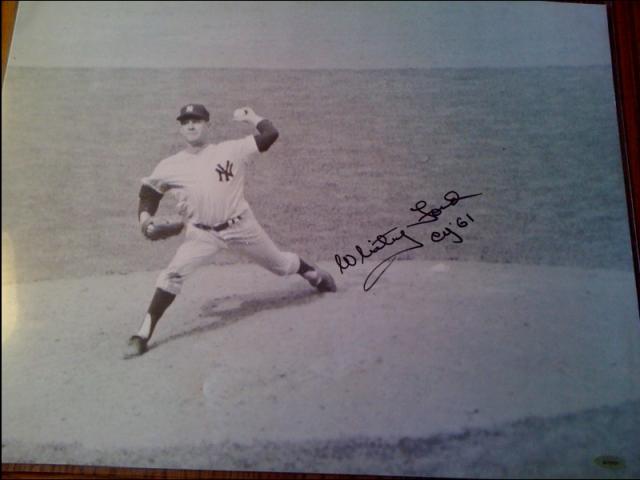 This beautiful black and white action photograph of New York Yankees pitcher Whitey Ford is just the type of autographed collectible that game historians, memorabilia collectors and die-hard Yankees fans look for when seeking a new piece to display in their home or office. This 16″ x 20″ photo is autographed & inscribed by Whitey Ford, who included reference to his 1961 Cy Young Award when signing this photograph. This rare piece of memorabilia carries a TriStar Hologram, certifying the authenticity of the signature. Order this photo now as we do not expect it to last long. Ford spent his entire 18-year career with the Yankees, amassing 236 wins, 1, 956 strike outs and finishing with a career ERA of just 2.75. In addition to winning the Cy Young Award in 1961, Ford was named World Series MVP for his performance in the Yankees’ title run that season. The six-time All Star was elected to Baseball’s Hall of Fame in 1974. Order today to add this handsome Whitey Ford Autographed Photo to your collection. Due to the rare natures of this signed piece we must charge your credit card for the full purchase price immediately upon receiving your order. This policy ensures we reserve this collectible for you. We will confirm your order by Email. This item is in stock now and ready to ship.