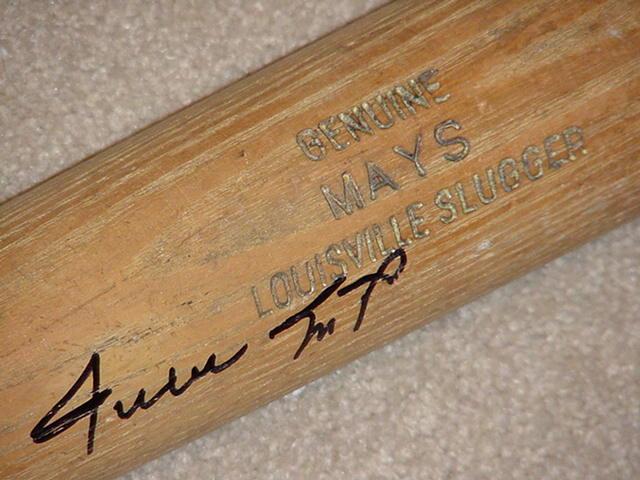 As the 2010 San Francisco Giants make their run to the World Series here at Big Time Bats we are pleased to offer Giants fans a once in a lifetime opportunity to procure a piece of team history – today’s Daily Bat Man Special is an Game Used & Autographed bat from none other than the “Say Hey Kid,” Willie Mays. Mays came up with the Giants while still in New York, but made the trip to the West Coast when the team moved after the 1957 season. This authentic Louisville Slugger H&B signature model S2 bat measures 35″ and weighs 34 ounces; used in the late 60’s to early 70’s, the still uncracked bat exhibits game use evidence throughout. A member of Baseball’s Hall of Fame, as well as both the 500 Home Run and 3,000 Hit Clubs, Willie Mays, who rarely signs game-used memorabilia, actually added his seal of approval to this beauty by signing, “Willie May 1969” to the bat.This bat comes with a Letter of Authenticity from PSA/DNA. Rabid Giants fans and collectors of historical memorabilia will burn up the lines trying to secure this rare gamer for their own. Act now!