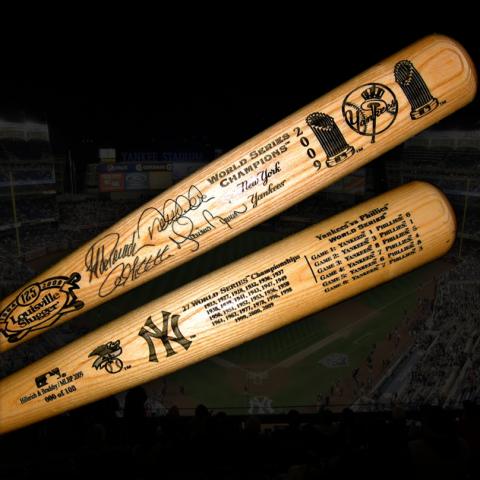 Attention: The image shown is a sample product and not the actual bat. Your Yankees “Core Four” Autographed Louisville Slugger bat will include the actual autographs of Derek Jeter, Jorge Posada, Mariano Rivera and Andy Pettite. Few teams can boast the power and skill represented by the Yankees’ roster, but fewer yet can point to a core of players who have helped their team win 4 World Series Championships. The New York Yankees feature a “Core Four” – Derek Jeter, Jorge Posada, Mariano Rivera and Andy Pettitte – who, together, have led the team in capturing four World Series titles. In honor of the team’s 2009 World Series Championship Jeter, Posada, Rivera and Pettitte autographed a very limited supply of authentic New York Yankees 2009 World Series Championship Louisville Slugger collectible bats now available exclusively from Hampster Industries. This very rare baseball collectible featuring the autographs of 4 Yankees legends is a Limited Edition bat that can not be found anywhere else. Baseball memorabilia collectors and loyal Yankees fans will generate swift demand for this unique piece of Yankees history. Order yours now. This 34″ autographed baseball bat is an authentic Louisville Slugger crafted product, created using the same techniques as when making bats used by hitters throughout Major League Baseball. This full size bat features a laser engraved Yankees team logo and 2009 World Series dates and scores. The bat you receive will include the actual autographs of Yankees Derek Jeter, Jorge Posada, Mariano Rivera and Andy Pettitte. Order yours now before they are sold out! Due to the extremely limited supply of this autographed Louisville Slugger bat we will charge your credit card for the full amount of this purchase immediately upon receiving your order to ensure we reserve your authentic and very rare collectible. We will confirm your order by Email. Please allow 4 to 6 weeks for delivery. This bat is not game used.