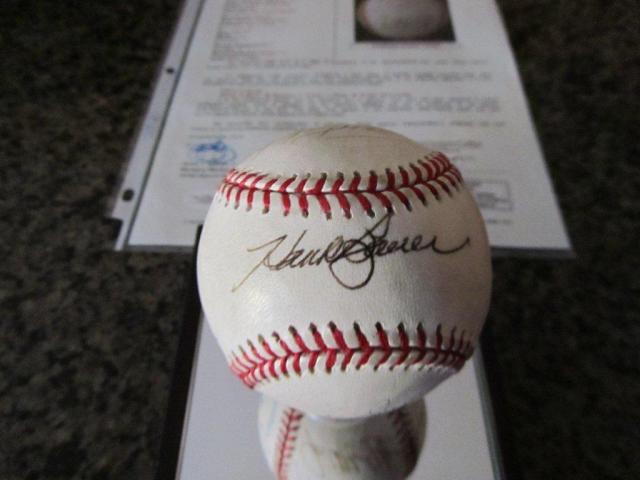 The New York Yankees are undoubtedly the most storied franchise in baseball history. So many legends, so many Hall of Fame members, so many titles … memorabilia signed by star players both current and from the past generates great interest from fans and collectors. This is an official Gene Budig-era AL Baseball featuring the signatures of nine (9) New York Yankees star players including Hall of Fame member Jim “Catfish” Hunter, Moose Skowron, Hank Bauer, Tony Kubek, Jake Gibbs, Mickey Rivers, Mike Cuellar, Johhny Blanchard and Steve Whitaker. This is a very rare and eclectic collection of Yankees autographs that is sure to draw the interest of long-time Yankees fans, game historians and memorabilia collectors. This baseball includes a Letter of Authenticity from PSA. Order it now! Ball is in stock and ready to ship. Another interesting note about this ball is that Gene Budig was the last American League Commissioner to serve in that post. Starting in 1994, Budig oversaw American League business until 1999 at which point MLB Commissioner Allan “Bud” Selig removed the position, as well as that of NL Commissioner, in a move to “unify the leagues.” Due to the rare nature of this item we must charge your credit card for the full amount immediately upon taking your order. This policy ensures we reserve rare collectible for the proper buyer. We will confirm your purchase by Email. This ball is not game used.