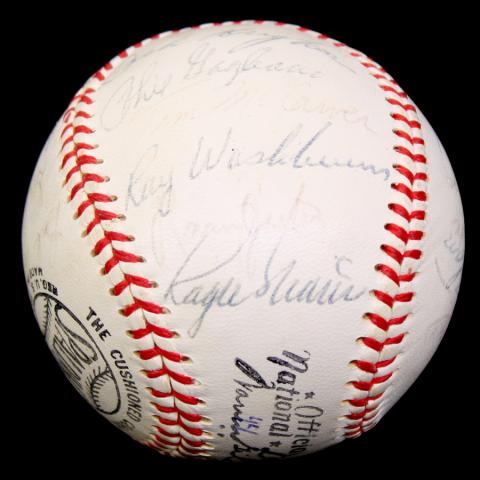 This baseball is autographed by one of the greatest teams in baseball history … the 1967 World Champion St. Louis Cardinals. This ball includes the authenticated signatures of several members of the Hall of Fame including Roger Maris, Bob Gibson, Lou Brock and others. This piece of history could be the most sought after collectible currently available, but it won’t be for long. If you want this autographed baseball for your collection you must order it right now. This official NL Warren Gile Baseball features 25 signatures including Maris, Gibson, Brock, Orlando Cepeda (HOF), Red Schoendienst (HOF), Alex Johnson, Del Maxvil, Ron Willis, Dick Hughes, Phil Gagliano, Tim McCarver, Ray Washburn, Larry Jaster, Julian Javier, Mike Shannon, Bobby Tolan, Jack Lamabe, Ed Spiezio, Eddie Bressoud, Joe Hoerner, Al Jackson, Nelson Briles and coaches Miliken, Schultz and Muffett. This nice, high grade World Championship ball is already over a half century old. The Cardinals won 101 games during the 1967 regular season, and defeated the Red Sox in an exciting 7 game World Series. The Maris signature on this ball would command well over $10,000 in this condition on single signed baseball. The addition of so many other Hall of Famers makes the a very special piece of any long-time Cardinals fan or game historian. This ball comes with a Letter of Authenticity from PSA/DNA. This ball is a limited item. To reserve this piece of history for the buyer we will charge your credit card for the full amount of the purchase. We will confirm your order by Email. Please allow 4 to 6 weeks for delivery.