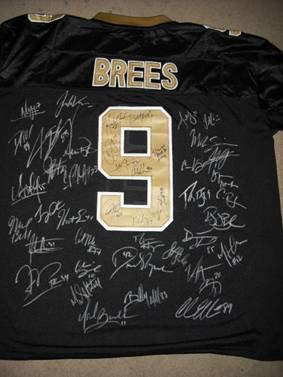 Although the Who Dat Nation knows every game requires a full team efforts, it sometimes seems like Drew Brees puts the team on his back and carries them to victory. Perhaps it is only fitting that this very rare and special piece of New Orleans Saints memorabilia features the signatures of 48 team members on the back of a Drew Brees jersey. Saints fans and sports memorabilia collectors are now on the prowl for authentic New Orleans Saints memorabilia, and we have the very best right here. This is an authentic Drew Brees New Orleans Saints Jersey personally signed by 48 members of the 2010-11 team, including: Sean Payton, Garrett Hartley, Thomas Morestead, Drew Brees, Chase Daniel, Marques Colston, Courtney Roby, Lance Moore, Robert Meachem, Devery Henderson, Randall Gay, Deshawn Wynn, Tracy Porter, Pierre Thomas, Reggie Bush, Malcolm Jenkins, Usama Young, Chris Ivory, Pierson Prioleau, Jabari Greer, Patrick Robinson, Chris Reis, Roman Harper, Heath Evens, Marvin Mitchell, Jonathan Vilma, Stanley Arnoux, Jason Kyle, Scott Shanie, Anthony Waters, Zach Strief, Matt Tennant, Anthony Hargrove, Charles Brown, Jahri Evans, Jermon Bushrod, Jonathan Goodwin, Carl Nicks, Jon Stinchcomb, David Thomas, Adrian Arrington, Jeremy Shockey, Will Smith, Remi Ayodele, Alex Brown, Jeff Charleston, Sedrick Ellis, Jimmy Wilkerson This team signed item was obtained through Who’s Who Productions, which uses autograph crews to obtain signatures from players as they move about the various cities they visit (hotel lobbies, outside stadiums, restaurants, etc). Who’s Who has been in business since 1993, and is the only company in the world that sets up autographed items in the Super Bowl venues and works directly with the NFL. This item was sent to Forensic Handwriting Expert Christopher Morales, a court qualified forensic science expert who worked formerly for the U.S. Secret Service as an examiner of Questioned Documents (forgeries). He has written a full page letter of authenticity, which includes a picture of this item, a full list of the players who signed it and, of course, his stamp of authenticity on all the signatures. Team signed item from last year’s Super Bowl Championship New Orleans saints team sold for $2,495.00 a piece. You can obtain this ball signed by the current team, which looks poised to make a return trip to the title game, for much less at this time. However, you must order now as supply is limited and demand is great. Due to the limited supply of these team autographed Drew Brees jerseys we will charge your credit card for the full amount of this purchase immediately upon receiving the order to ensure we reserve your collectible. We will confirm your order by Email. Please allow 2-3 weeks for delivery. This jersey is not game worn.