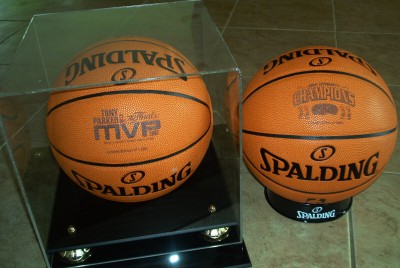 San Antonio Spurs 2007 NBA Championship Deluxe Collectible Basketball Set. Spurs fans can celebrate the 2007 SWEEP of the Cleveland Cavaliers with this LIMITED EDITION Deluxe Commemorative Basketball Set from the Spurs’ 2007 NBA Championship. This deluxe set includes the collectible Tony Parker MVP ball and the Spurs Championship balls; your set will be from among the first 207 balls in the series with matched serial numbered. ORDER YOURS NOW! This set include 2 laser-engraved official Spaldling basketballs and 2 display cases. The serial numbers for the two balls will match and they will be the low serial numbered balls. The first 207 basketballs from each series. Order yours now! These balls are not game used. This is an officially licensed Spalding commemorative NBA basketball.