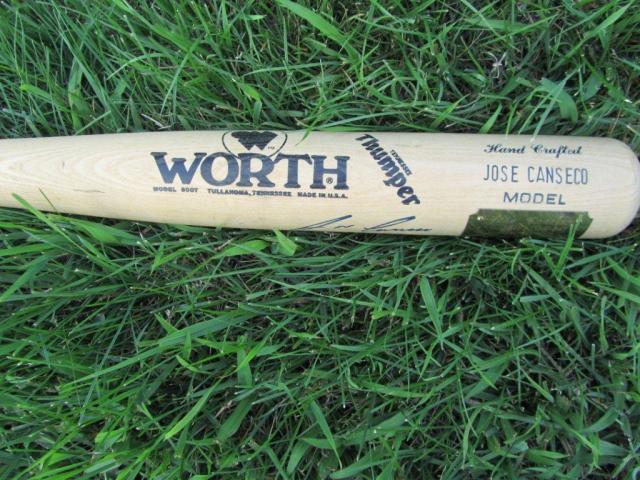 One half of the legendary “Bash Brothers,” there is no denying that Jose Canseco played a major role in the success of the Oakland A’s during their run of success in the late 80s. Not only did Canseco swing a heavy bat, he also swiped his share of bases – in fact, Jose Canseco was the first player in major league history to hit 40 home runs and steal 40 bases in the same season. This bat is a Worth Tennessee Thumper Pro Model signed by Jose Canseco in blue marking pen, and featuring a special engraved plate commemorating Canseco’s 40/40  MVP Season. It is number 318 from a Limited Edition of 400 commemorative bats created for this milestone. This bat was part of Curt Schilling’s private collection, and comes with a personally signed Letter of Provenance attesting to that fact. Furthermore, the bat comes with a Certificate of Authenticity from James Spence Authentication. Due to the rare nature of this item we must charge your credit card for the full amount immediately upon receiving your order. This will ensure we reserve the bat for you. We will confirm your order by Email. This bat is not game used. This item is in stock now and ready to ship.