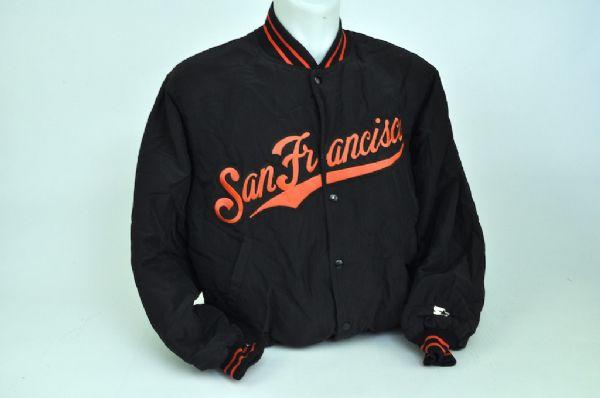 This is a very unique piece of game worn baseball memorabilia that would most certainly appeal to die-hard SF Giants fans and Rod Beck fans alike. This is a Game Worn Jacket donned by Giants closer Rod Beck at times during his 7 season in the San Francisco bullpen. Bay area summer nights can be chilly, so Beck is believed to have worn this jacket frequently while awaiting the call to shut down the opposition and close out another Giants win. Born Rodney Roy Beck, nicknamed “Shooter,” Beck played for the Giants, Cubs, Red Sox and Padres throughout a career that spanned 14 seasons. He amassed 286 career Saves and was named to the All Star Team on three occasions. His life ended prematurely; Beck died on June 23, 2007. The jacket features a slightly faded no. 47 on the inside neck tag, and comes with both a Letter of Provenance and Letter of Authenticity from Vintage Authentics. In order to reserve this jacket for you place your order now, at which time we will charge your credit card for the full amount of the purchase. We will confirm your order by Email. Please allow 4 to 6 weeks delivery. This is a very nice San Francisco Giants Game Worn Jacket.